All info about our research Covid-19

This information was used as input for an article in the Belgian newspaper DeMorgen on May 14th, 2020.

We are grateful for the ability to make use of publicly available data, graciously made available by Statistics Belgium and Sciensano. We are grateful for comments, suggestions, critical reflections, and other contributions by (alphabetically) Brecht Devleesschauwer, Toon Braeye, Natalia Bustos Sierra, Sophie Quoilin,  Francoise Renard, Katrien Tersago, Dominique Van Beckhoven , Nina Van Goethem, Herman Van Oyen, and others. Evidently, any errors in the analysis are the sole responsibility of the authors.

Below, we will provide some insights in the excess mortality in Belgium that is due to COVID-19.

How much of the excess mortality can be explained by COVID-19?

The following graph is based on public data from Sciensano and Statbel, and displays the Belgian mortality in 2020 (red profile), in comparison to annual mortality profiles for 2009 – 2019 (grey profiles), as well as the average of 2009 – 2019 (black profile): 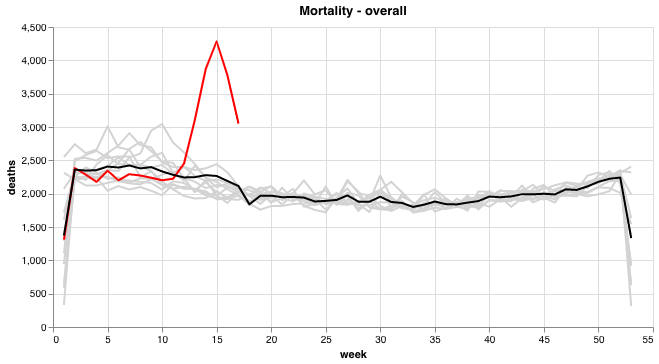 Note that mortality does fluctuate considerably in the first trimester of the year, more so than in other quarters. This results from typical seasonal diseases, such as seasonal flu. The red peak, though, rises sharply above the usual seasonal variation, and at a different time.

Influence of age on COVID-19 mortality

It is well-known that this peak is strongly driven by the older age categories, as is seen from the following graph:

Influence of gender on COVID-19 mortality

As we will see below, mortality is higher in males than female. The graph below, though, seems to suggest the opposite, which is entirely due to the demographic fact that in the older age bracket, as there are more females (approx 200,000) than males (approx 100,000). 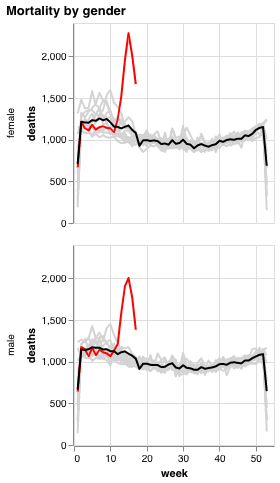 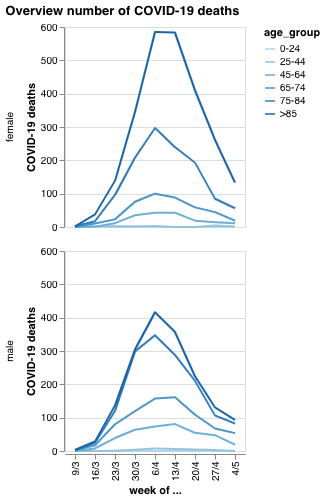 The above concerns the absolute numbers, but what does this look like in relative terms? How many patients reported with COVID-19 actually die? For this, we look at the so-callsed case fatality rate (CFR): 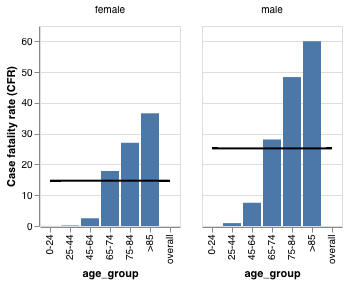 These case fatality rates, while distressingly high in the older age groups, are low to very low non-existent in the age groups from 0 to 45. The CFR refers to mortality against the background of confirmed cases. The ratio of deaths over confirmed cases was based upon all COVID-19 deaths from March 9, 2020 until May 9, 2020. The confirmed cases as reported on April 27, 2020 were considered, to avoid underreporting of deaths. More sophisticated analyses to take the delay distributions between the various events into account, such as infection, onset of symptoms, hospitalization, and death, show similar results.  The horizontal bars represent the average CFR for the population (by sex group), roughly 15% for females and 27,5% for males.

Related to the CFR, the infection fatality rate (IFR) indicates the mortality rate over all people who are infected (including those without symptoms). 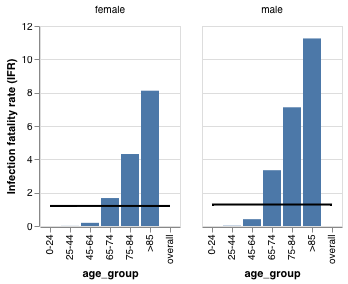 For this, we need the real number of cases which is unfortunately not know without testing every single individual. Therefore, it needs to be estimated. This was done using the prevalence estimated from a serological study conducted by Antwerp University (Pierre Van Damme, Heidi Theeten, UAntwerp), with a correction for prevalence in nursing homes. As you can see in the plot above, the IFR is obviously much lower than the CFR, The averages are roughly 1.5% for males and females, but with dramatic differences across age categories. In the oldest age categories, they jump to 8% and 11% respectively, while they are virtually 0% for people under 45 years of age.

Reports of high per capity death rate in Belgium

Belgium has been mentioned internationally for its very high per capita death rate. The following figure partially explains why. 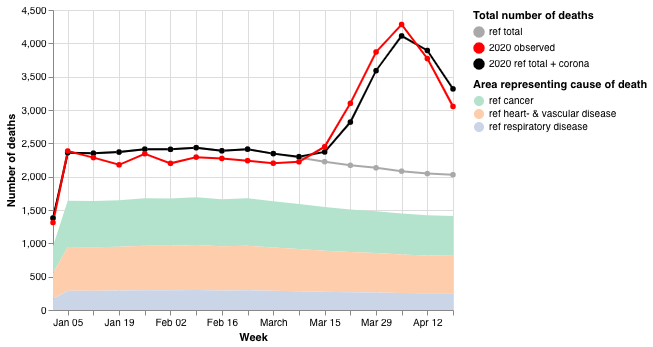 The grey curve shows mortality in a reference year, determined as the average across the years 2009 – 2019. The lower areas (green, orange, blue) give an indication of the slices taken, in reference years, by the major mortality causes: cancer, cardiovascular disease, and respiratory disease (including, among others, influenza induced deaths). We created a synthetic profile by adding COVID-19 mortality to the reference curve, producing the black curve. This synthetic profile corresponds to the hypothetical situation where perfect average mortality would suddenly be superimposed with pure COVID-19 mortality. The real situation is given by the red curve: the properly observed mortality curve for 2020, across all causes. Red and black are similar! It is clear that 2020 was relatively mild in terms of mortality across January and February 2020. What is also clear, and important for us now, is that excess mortality in 2020 coincides with COVID-19 mortality. So, people who died and were COVID-19 positive create a heap in the mortality curve that coincides with overall mortality.