All info about our research Covid-19

WHAT KIND OF MODELS DO WE USE?

We offer an abridged, simplified explanation of how various models work and what their relative strengths are. Behind the models, one finds passionate researchers at Hasselt University (headed by Prof. Niel Hens and Prof. Christel Faes) and the University of Antwerp (headed by Prof. Philippe Beutels). Jointly, they form the interdisciplinary SIMID team (www.simid.be).

In a growth model, data on, for example, hospital admissions, number of tests, etc. are used to compute how the spread of the virus evolves over time.

Growth models let the data speak for themselves. The team examines which trends can be discerned in, for example, the number of hospital admissions that is reported on a daily basis. Do we see an increasing curve? Have we passed the peak? Is the increase exponential or is it better to model the curve logarithmically? Are there differences between men and women? What about provincial differences?...

This approach lends itself naturally to estimate how the growth factor of the epidemic changes according to measures taken, or under the influence of a changing testing strategy.

The virus holds a number of complexities in store. One of these is the difficulty in gauging the time interval between the onset of symptoms and potential hospital admission. This time interval differs from person to person. It isn’t routinely reported, but it does have an influence on what the curve looks like, and which predictions can be drawn from it. 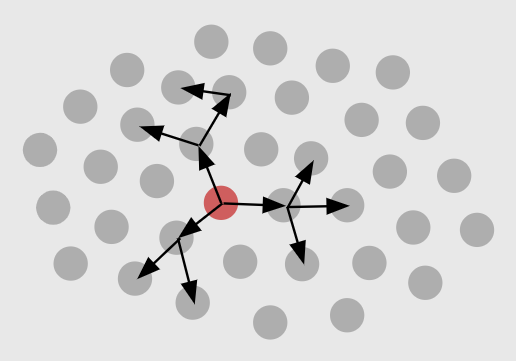 In a transmission tree, we model how the virus spreads among individuals, by tracking the spread: who infects whom?

Transmission trees aim at mapping the chain of infections among people, just like new branches grow in a tree. To study where a new infection might come from, one can examine the genetic similarity of the virus among people, or we can make use of contact tracing. For COVID-19, contact tracing was applied at the onset of the epidemic to find out in which region a person could have been infected. As the epidemic gains strength and the number of infected people increases, contact tracing is no longer feasible.

Transmission trees are not at all used to accuse people who might have transmitted the viral infection. Rather, they are a wonderful tool to help estimate key characteristics of our SARS-CoV-2. These characteristics are important to find out how quickly the virus can spread and hence how urgent the need is for measures. A key quantity is the basic reproduction number (R0). When R0 falls below 1, then an infected person will typically infect less than 1 other person, in a fully susceptible population. In that case, the virus is under control. To determine R0, we need the growth rate at which the number of cases increases. One also needs information about the time lapse in a so-called infector-infectee pair (how long does it typically take between someone getting infected and then, in turn, infecting someone else). This is called the generation interval. Similarly, we need information about the serial interval, i.e., the time it takes between the infector beginning to show symptoms and the infectee to show symptoms. In addition, we need the incubation period. This information combined allows the team to estimate the chance that someone passes on the infection to someone else before showing symptoms.

Based on COVID-19 data from China and Singapore, the team was able to show that R0 is estimated to be higher when based on the generation interval, than if based on the serial interval (see here for paper). This insight is crucial, because advice towards an exit strategy should be based on the most accurate estimation possible for R0. The team showed that, because of the high risk for pre-symptomatic infection, it is very important to maintain social distance measures. 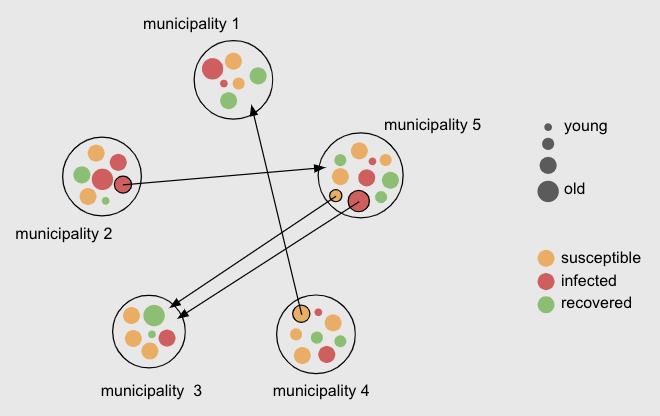 In a meta-population model, individuals, individuals are considered as inhabitants of a given town or other geographical unit. One then examines how many people in a town are susceptible or not (e.g., because they are cured), what their age is, etc. Such a model also describes which subgroups of individuals move between towns, etc.

A meta-population model is a robust, large-scale model, that allows to incorporate people’s mobility. It divides the population into groups based on age category, residence, etc. Each of these groups follows an underlying mathematical model for the spread of the epidemic. Such a model assigns people to subgroups (a.k.a. compartments): (1) susceptible people, (2) exposed people; (3) infected people, and (4) recovered people with (temporary) immunity against the virus. By mimicking interaction between such groups according to various scenarios (e.g., little or a lot of contact with people outside the household, little or ore mobility between towns,…), it is possible to predict how the number of infected people changes over time, in the short time as well as over longer time intervals.

Important sources of information are the number and the nature of social contacts of people in various age categories, the mobility patterns of people in different regions, etc.

In individual-based models, people are studied in their own context. For example, household size (e.g., family with three children, a single-person household, and two families with one child), and how intense their contact are in, for example, a shop and at work.

The individual-based model (IBM), based on the number of hospitalizations, performs well in terms of: (1) describing the spread of the disease; (2) examining the consequences of relaxing the measures taken, i.e., candidate exit strategies.

In an IBM, each individual is assigned to a family, a school category, type of workplace environment, and the population at large. This assignment is guided by data available from school registries as well as employment data.

The model ‘imitates’ the behavior of individuals on a day-by-day basis. It accounts for changes in behavior on weekend days relative to weekdays, during holiday periods and, importantly, also as a result of measures taken, such as school closure and reduced social contact.

When investigating the consequences of exit strategies (e.g., reopening of schools and certain workplaces), the team also examines the added value of contact tracing to monitor and avoid new infections.

One thing is absolutely clear: relaxing all measures at once is not a good idea, because that will lead to a resurgence of the epidemic, including a new peak in the number of hospitalizations and the COVID-19 related deaths. 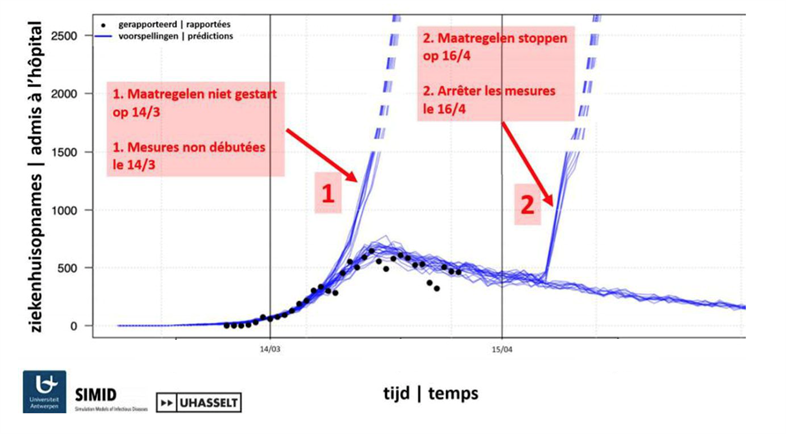 A compartmental model divides the population in various sub-populations between which people can migrate. These complex flows are described by a set of differential equations. There is one such differential equation per group of susceptible, exposed, infected, and recovered patients. This basic model is referred to as the SEIR model. Not in every infectious disease do modelers make use of an exposed category. However, for COVID-19 it is crucial, just because people can be infectious prior to symptom onset and/or prior to formal diagnosis. The model accommodates pre-symptomatic and asymptomatic cases, because these contribute to the spread of the infection. The differential equations describe the flow between compartments in terms of calendar time and age categories. Contact information is taken on board as well, the age distribution in the population, age-specific mortality. Based on models of this type, the team is able to estimate the basic reproduction number R0, a key quantity used to express how contagious a virus is. 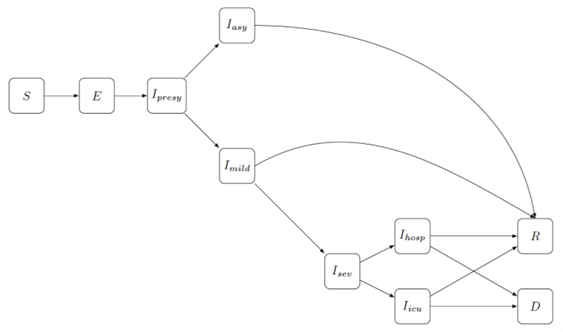 Schematic representation of a compartmental transmission model that splits the population into several groups (compartments): S: "susceptible" for COVID-19, E: "exposed" to the virus, I: "infected", R: "recovered" and D: "deceased". The arrows indicate how a peron can move from one compartment to anohter. This move is mathematically expressed a differential equations. The different I-subgroups resemble the different disease progressions of an infected person: Ipresy: presymptomatic phase in which the individual does not have any symptoms; Iasy: asymptomatic course of the disease in which the individual never shows symptoms; Imild: the individual has mild symptoms; Isev: the individual has severe symptoms with hospitalisation (Ihosp) or admission to intensive care (Iicu).