"Pathways toward increased efficiency and lifetime of organic photovoltaics."

Organic photovoltaics (OPV) have seen a strong growth over the past decennium, attracting researchers worldwide by their appealing features such as flexibility, transparency, light-weight, and the ability to fine-tune the color. This aesthetically attractive nature inspires for instance building, automotive and textile integration. However, device efficiency, stability and production cost are key parameters that need to be addressed further to enable a successful commercialization of this thin film PV technology. In this thesis we have worked on the optimization of two of these parameters, i.e. efficiency and stability, through the design and development of specific conjugated polymers and their evaluation in bulk heterojunction polymer solar cells. 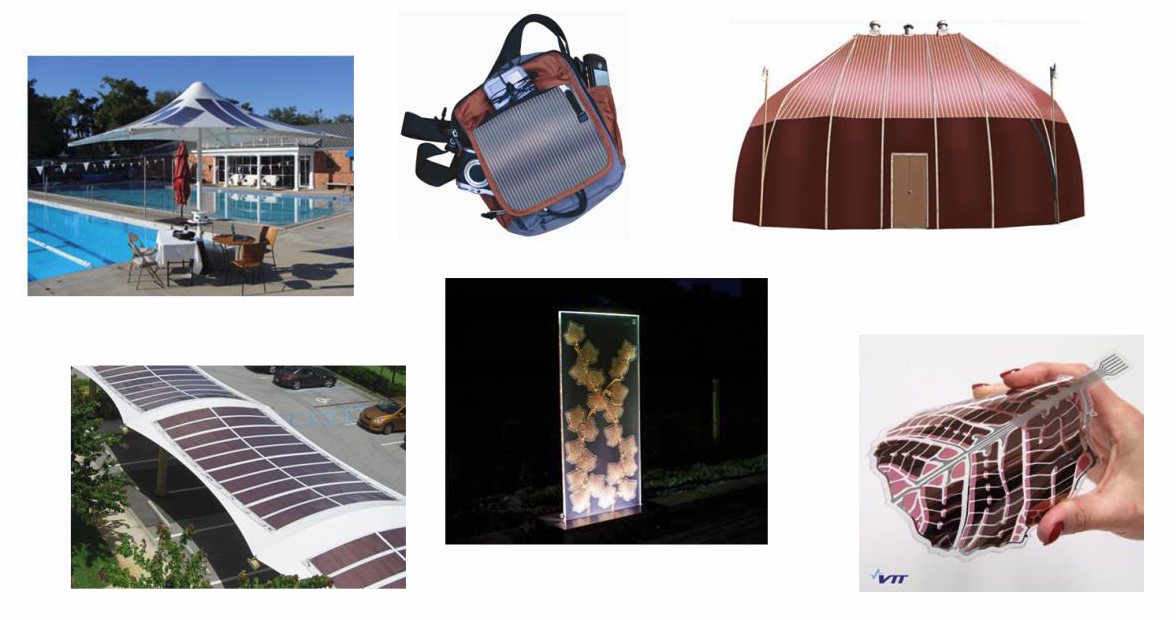 In first instance, we have focused on the stability aspect and demonstrated the enhanced thermal durability of P3AT:PC61BM solar cell devices through the implementation of side chain functionalization (ester, alcohol, cinnamoyl). Even though polythiophenes have been outperformed by low bandgap push-pull conjugated polymers, they provided an ideal test-case to investigate the side chain strategy. Upon exposure of the devices to a continuous stress of 85 °C for 700 hours, it was shown that the solar cells based on the functionalized P3AT materials exerted only a small reduction in PCE, whereas the reference P3HT:PC61BM device only maintained 35% of its initial performance. This large difference could be attributed to changes in the (nano)morphology of the blends. Transmission electron microscopy (TEM) revealed the formation of microcrystalline structures for the reference device, assigned to PC61BM-rich domains. Through the presence of the functional side chains, enlarged resistivity against this phase separation phenomenon resulted in more durable devices.

In a next step, this strategy was extended to a particular low bandgap copolymer, PCPDTBT. Thermal analysis of the functionalized (alcohol, ester) PCPDTBT materials revealed inherently higher Tg’s, strongly reducing the phase separation tendency. Possible degradation upon thermal stress hence had to originate from different processes. Once again, more stable photovoltaic devices were procured for the functionalized copolymers, with PCE’s up to 55% of the starting value after exposure to a temperature of 85 °C for 650 hours, whereas the performance of the reference device lowered to 26%. The degradation profile was characterized by a strong initial (burn-in) decay, followed by a more linear regime. Through deconvolution of the various degradation pathways, it was found that upon insertion of an alcohol or ester function, a higher resistivity toward reduced interface (active layer–top electrode) quality could be obtained.

In a second part of the thesis, we have focused on the improvement of the photovoltaic performance by dedicated material design. More specifically, work was done on particular low bandgap donor copolymers. As the electron-rich component, dithieno[3,2-b;2’,3’-d]pyrrole (DTP) has been moderately successful, with a recently reported OPV performance up to 4.8%. However, the maximum obtainable Voc is limited when using standard N-alkylated DTP derivatives. To overcome this issue, we have employed DTP N-acylation. Through linkage with the strongly electron accepting TPD unit, a PDTPTPD:PC71BM polymer solar cell with a record Voc of 0.8 V was obtained, with a corresponding PCE of 4.0%. Upon insertion of a specific conjugated polyelectrolyte interlayer, the performance could be enhanced further to 5.8%.

The same N-acylated DTP was then also combined with quinoxaline acceptor units. This building block was chosen for its ability to allow the incorporation of additional fluorine atoms. In this way, a PCE of 4.81% was obtained (with a Voc of 0.67 V) for a BHJ PDTPQx:PC71BM polymer solar cell. Unfortunately, the fluorination strategy was not really successful. By atomic force microscopy (AFM) imaging it was shown that fluorination of the polymer promotes the formation of (PC71BM-rich) domains in the photoactive layers during film formation.

In the final part of this work, a different approach was investigated toward organic solar cell optimization through the implementation of conjugated polyelectrolyte (CPE) (cathodic) interlayers between the photoactive layer and the top electrode. Ionic polythiophene based materials were used to replace calcium, which is sensitive to oxidation, and they simultaneously enhanced the photovoltaic performance. When applied between PCDTBT:PC71BM and Al, the device performance increased from 5.71% (for a reference device employing Ca/Al) to 6.69%. This enhancement was found to be due to a lowering of the series resistance, facilitating electron injection. Similarly, when applied on top of PCPDT-DTTzTz:PC71BM, an increase from 4.78 to 5.43% was observed.

In a similar approach, a set of different CPE (cathodic) interlayers was applied in PBDTTPD:PC71BM devices and their influence on the photovoltaic performance was investigated. One specific CPE material performed really well, affording devices with a PCE of 9.08% (7.91% reference device), a record efficiency for this photoactive material. Application of the same CPE on top of PCDTBT:PC71BM, however, revealed different results in respect to the I-V parameters. For PBDTTPD:PC71BM devices, the increased performance originated mainly from a gain in Jsc, whereas for the PCDTBT:PC71BM system, all parameters (Voc, Jsc, FF) showed improvement upon insertion of the CPE interlayer. By AFM imaging, a difference in compatibility of the ionic (co)polythiophene and the different underlying polymer:fullerene active layers was observed.