Nanoscience and nanotechnology are derived from the Greek word nanos which means ”dwarf”. As indicated by the name, these fields focus on small structures or materials that have at least one of their featured dimensions below 100nm. Fig.(1.1) lists a number of objects ranging from the macroscopic scale down to nanoscopic scale. In contrast to a human hair with a diameter of few tens of micrometers, the size of a single electron transistor can be a few nanometers only. 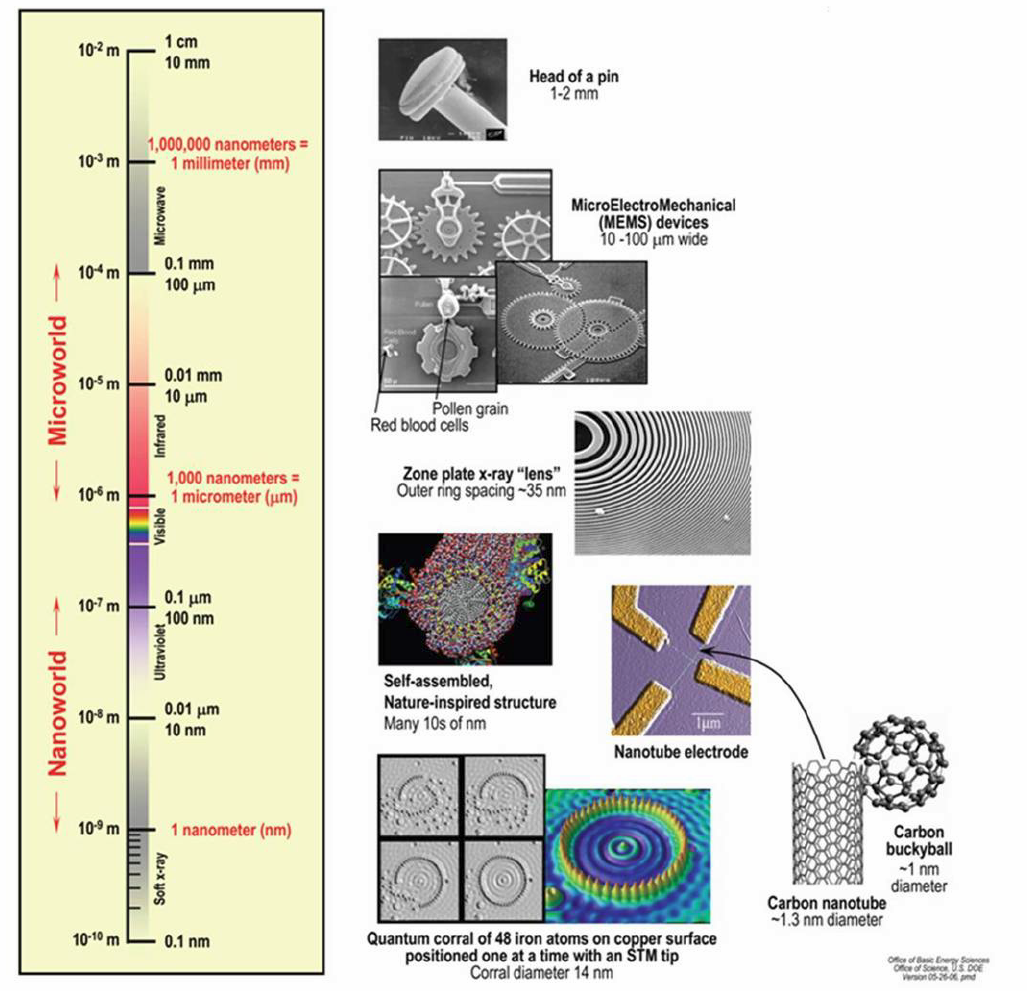 The reason why nanostructures have been attracting researchers from various fields is based on the extraordinary properties that they usually demonstrate as compared to bulk materials, and the potential applications that they do offer in many aspects. Examples can be easily found in nature, e.g. self cleaning lotus leaves, or a gecko’s feet that can hold its body on the wall against gravity. Besides the examples observable in nature, applications of nanostructures can be found in ancient civilizations as well. For example, cementite nanowires and carbon nanotubes were found to be present in the steel of the Damascus blade, which has outstanding mechanical properties and an exceptionally sharp cutting edge; whereas in the medieval church windows, gold and silver nanoparticles are responsible for the colorful patterns on the stained glasses, and these nanoparticles were lately also reported being able to purify the air in a church.

As more and more discoveries revealing the application of nanostructures in ancient times are being reported, it is difficult to define the exact starting time of nanotechnology. However, a mile stone that is often referred to as the starting point of modern nanoscience and nanotechnology is the famous talk by R. Feynman about half a century ago, which emphasized that ”there is plenty of room at the bottom”. Later, the concept of nanostructured solids was suggested. Over the past decades, nanoscience has boomed into a multidisciplinary research field that involves physics, chemistry, biology, materials science and engineering etc., which eventually makes it difficult to distinguish the frontiers between these disciplines. As a consequence, nanotechnology is being more and more exploited in the areas of electronics, spintronics, photonics, plasmonics, catalysis, energy harvesting and storage, environment cleaning, biosensing, targeted drug delivery, and gene therapy etc., as illustrated in Fig.(1.2).

The applications in nanotechnology are primarily determined by the properties of the corresponding nanostructures. With the development of modern characterization techniques, more and more basic properties of nanomaterials are being explored and well understood. In principle, novel properties are inherent to nanoscaled systems due to a reduction in their dimension or size. Once the size of an object is smaller than some intrinsic physical length scale, e.g. the wavelength of Fermi electrons, quantum size effects are expected to occur. The simplified picture of a particle-in-a-box can already tell us the reason for an increased bandgap energy of a semiconductor nanoparticle as compared to its bulk intrinsic value. Well-separated energy levels of electrons induced by quantum confinement also result in quantized electrical and thermal conductance . Furthermore, nanostructures have an increased surface to volume ratio as compared to bulk materials. This leads to a decreased melting point and lattice constant for the nanoparticle.
When the size of a nanostructure is reduced to smaller and smaller values, the increased surface to volume ratio and quantum confinement will get more and more pronounced. This offers the possibility to tune physical and chemical properties by tailoring the dimensions of the involved nanostructures. Interestingly, some material properties sometimes even show a resonant behavior as the size is varied.

Nowadays, the tailoring of nanostructures can be achieved by a variety of techniques owing to the joint efforts of many researchers from different scientific areas. Several of these techniques take advantage of the top-down approach as in lithography, which involves the sculpting of nanostructure onto a macroscopic object. On the other hand, a bottom-up approach organizes smaller building blocks into nanostructures by means of the self-assembly of, e.g., macromolecules like DNA or block copolymers. Sometimes, both approaches (top-down, bottom-up) are also combined in order to achieve a specific arrangement of the desired nanostructures.

The aim of this thesis is to add to the knowledge of physical and chemical properties of size-selected supported nanoparticles and to shed some light on possible applications. For this purpose, we start with the (conventional) micellar technique for the preparation of supported nanoparticles, whose sizes can be easily tuned between 1-10nm. The first part of the thesis extends the micellar technique to be suitable for a larger variety of material systems, and to improve the quality of the resulting arrays with respect to the size-distribution and the degree of order within the particle ensembles. In the subsequent part, some of their physical and chemical properties are explored.

Based on this outline, chapter 2 starts with the experimental methods relevant to this study including the description of the required ultra-high-vacuum (UHV) based preparation and analysis tools which had to be built ’from scratch’ at the beginning of this work. Following that, in chapter 3, we focus on the preparation of nanostructures by extending the micellar technique. Using size-selected nanoparticles, in chapter 4 we study the formation and stability of gold nitride at the nanoscale, followed by the synthesis of hollow nanostructures taking advantage of diffusion phenomena occurring at the nanoscale (Kirkendall effect). A brief summary and outlook is presented in chapter 5.
.