Despite the fact that using the current state-of-the-art silicon technology very high-performance electronic components can be manifactured, there has been an increasing demand for alternative materials. This is because the production of silicon-based components is very cost intensive because of the requirements of a high-vacuum and high-temperature production. Thus, the research has been stimulated significantly over the last decades in order to search for alternative materials for the manufacture of electronic components via cheaper production. A valid alternative to silicon has been found in the semiconducting polymers. The advantage of these polymers is that its deposition from solution can be done via low-cost printing techniques. A further advantage is that these polymers can be combined with light, flexible substrates so that fully flexible and robust electronic components can be made. To become a market ready product  the performance of organic electronics must be improved.

One of the points at which there is still much need for improvement, is the mobility of the charge carriers in these polymers. To achieve this, the crystallinity of the active layer should be increased. This can be obtained through pre-deposition methods, by the formation of crystalline nano-structured particles in the polymer solution. An example of this is the formation of nanofibers in a solution of poly (3-hexylthiofeen) (P36T). After deposition these P36T fibers predominantly oriented in parallel with the substrate surface, so that they form a high-crystalline network of little tracks, ideal for the transport of electric charges in transistors, in which the direction of electric current is in parallel to the substrate surface. The P36T crystalline nanofibers also have, compared to amorphous P36T, an increased absorption of (sun) light. In this research work, it is now intended to, making use of the increased carrier mobility and improved light absorption, to show that P36T nano fibers are extremely suitable for the production of low cost flexible organic phototransistors. These are organic transistors, wherein the current can be controlled through either an applied voltage as well as through the absorption of light.

Chapter 1 begins with the historical framing of this thesis, in focus on the question of the electronics industry to lower the production costs. Furthermore, a brief theoretical summary is given about the origin of the semiconductor properties, and the transport of charge carriers in P3AT. In conclusion, the theory of the generation of charge carriers through light absorption in P3AT is discussed.

In chapter 2 gives a summary of the most important methods for the production of nanofibres with a view to use them in the active layer of organic electronics. In addition, the various applications of these nanofibers, especially on transistors and solar cells are highlighted. 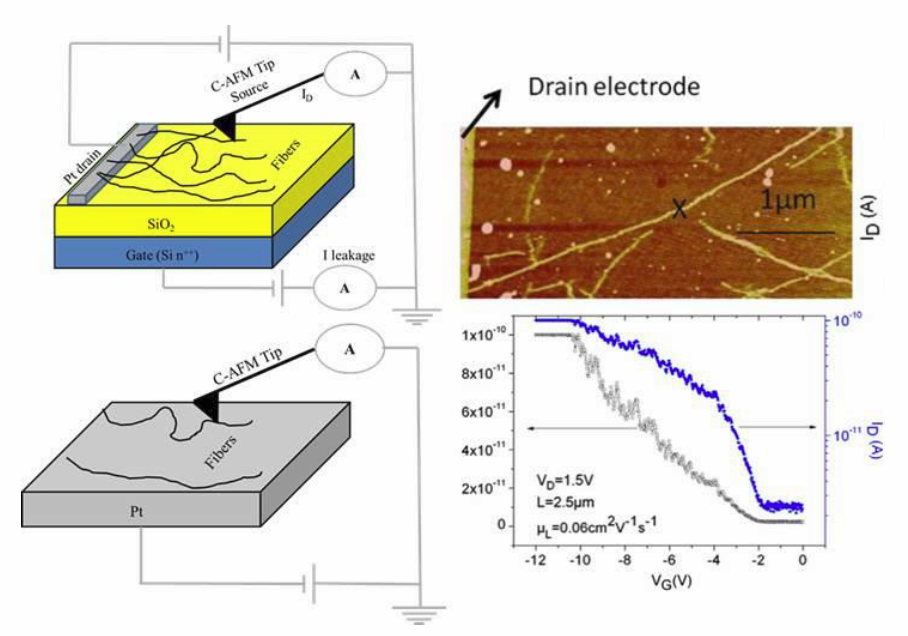 In chapter 4, first, the production and characterization of P36T nano-fibers in solution is covered and then the nanofiber solutions are used for making organic phototransistors. After deposition of the nano fibers on transistor substrates, the morphology of the active layers formed is determined with an atomic force microscope. Subsequently, the transistor parameters are measured, and the responsiveness and sensitivity under the influence of light is determined. The analysis of the measurement results takes place on the basis of the theory that, together with the schematic structure of the photo transistors, is explained in Chapter 3.

Chapter 5 contains the conclusions of the obtained measurement results and also takes a look at the future of research in organic electronics.