PhotoRDRP (photo-induced reversible deactivation radical polymerization) has only recently received significant attention, even in classical batch chemistry. The interest in these methods is rapidly growing, owing to the high efficiencies that can be achieved with ease. As described above, the reaction efficiencies can be further increased when switching to photoflow processes. Additionally photoflow offers the engineering advantage that products can be synthesized in significant amounts without the requirement of expensive equipment.

A comparison between photobatch and photoflow synthesis of polymers via RDRP mechanisms shows the enormous advantages of using continuous photoflow reactors. For all photoRDRP methods used in this thesis, a clear increase of the polymerization rate was observed. 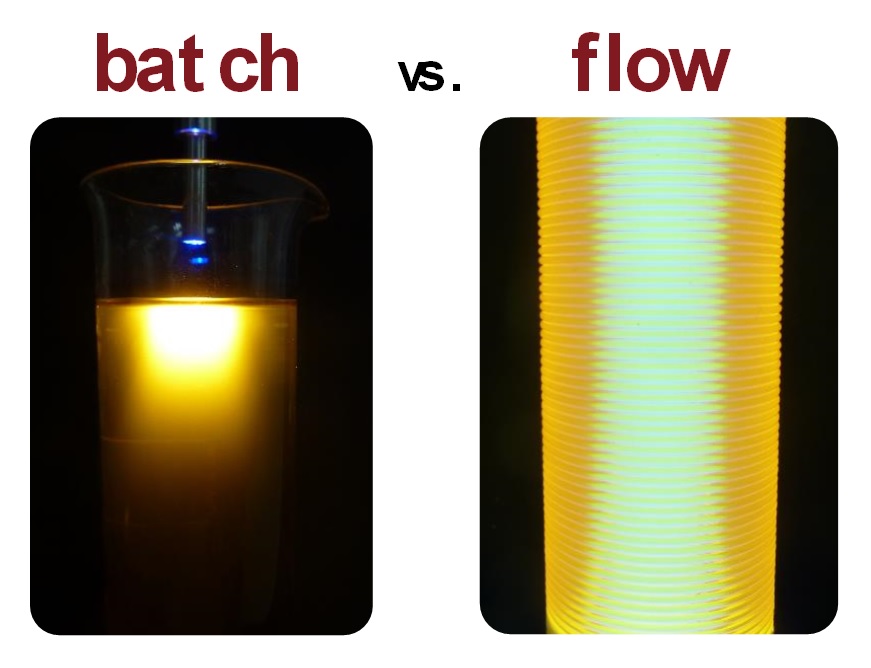 Continuous flow production of high precision polymer materials is highly advantageous. A significant advantage was even observed when switching flow reactors from thermal to photochemical mode. Photoreactions benefit from flow processing in a way that easily surpasses the batch reaction effects. Flow photoreactions allow for enormous increases in reaction rates and are able to eliminate side product formation significantly. This effect is not routed to isothermicity, but is due to the excellent light illumination that is reached when internal flow diameters are kept low.
As photoRDRP methods copper-mediated and reversible addition-fragmentation chain transfer (RAFT) polymerizations were used to synthesize acrylate based polymers. Linear as well as star shaped polymers were obtained and block copolymers made. For the synthesis of poly vinyl acetate a cobalt-mediated polymerization method was explored.